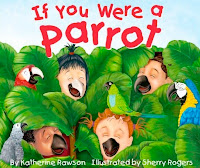 On Tuesday, March 5, I had the wonderful opportunity to introduce my pet parrot ambassador, B.C., to Ms. Crow's 3rd grade class at Browning Elementary.  We started with a quick true/false quiz on some fun parrot facts to see where they stood on avian knowledge, such as " Parrots have five toes just like ours"; " Parrots are picky eaters and only eat bugs "; " Some parrots can talk or imitate sounds "; " Like cats, parrots hate water or baths "; and " Parrots necks can twist very far so they can search under things for food" (answers:  false; false; true; false; true), then I went on to story time with the whimsical book "If You Were A Parrot."  After story time, I again presented the previous quiz questions so the students could understand the facts they already knew were correct, and those that were different.  I followed this with more detailed descriptions of the various parrots that were illustrated in the story--Blue & Gold Macaw, Scarlet Macaw, Nanday Conure, and African Grey--along with B.C.'s breed--Red-Lored Amazaon.  This was the time I could bring B.C. out of his clear plexiglass carrier for the students to get a closer view.  There were lots of questions, and lots of fun answers to share about this lovable (and ornery!) 29-year-old feathered friend of mine :-)  I explained to them the reason B.C. has a band around his ankle (because he was imported, most likely from Mexico); his aversion to the color orange; the fact he is missing one of his toenails because of a "spat" he got in with a Macaw at the pet store before I adopted him; how he loves to take showers with me; how he has a special aversion toward my husband, Chris, because B.C. considers me his partner and Chris just gets in the way; and how he loves to sing, but only to really loud video games or movies!  B.C. was definitely on his best behavior, so mama was very proud of him for his first educational outing!

The story time session ended with a writing/drawing activity where I asked the students to relate some of the fun things they learned from this presentation and/or draw what they or someone else might look like as a parrot.  I adored some of the quirky illustrations of B.C.--which just coincides with his eccentric nature--and some facts that stayed with them.  Looking forward to sharing my feathered buddy for future story time sessions!

Some of the fun drawings from the students :-) 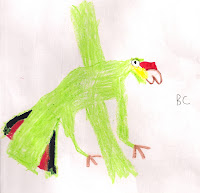 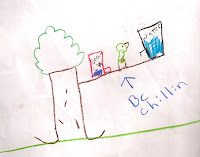 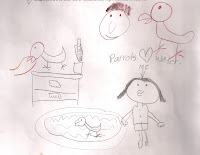 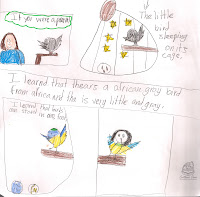