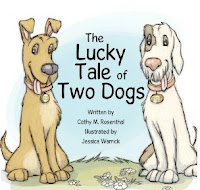 On Friday, April 12, I had a fantastic opportunity to introduce another new team to Browning Elementary when Sarah Magill, with her rescue pup Barbie, accompanied Chloe & me.  We presented to Ms. Steury's 3rd grade class where I read the story "The Lucky Tale of Two Dogs" that traces the lives of two canines who happen to live "in the very same town, on the very same street," but who share very different lives with their families.  The lucky dog has lots of daily interaction
with his family, from playtime to walks around the neighborhood.  The unlucky dog spends most of his time alone in the backyard "rarely hearing a friendly voice."  These comparisons give way to hope when the unlucky dog meets a "kind lady" from the animal shelter who helps him find a new "family to love."  The book tells a simple story that makes it easy for children to understand what dogs need to be healthy and happy.

After the story I had the class participate in a Venn Diagram activity where they compared the differences and similarities that existed between these 2 situations prior to the unlucky dog being rescued.  For example, they both were given food and water (although the unlucky one not in as healthy a way as the lucky one), but differed in the attention and human interaction they experienced.  Sarah and I then related the rescue stories of both Chloe and Barbie, after which the students again participated in another Venn Diagram activity relating the similarities and differences before they were rescued and
afterward.  For example, both Chloe and Barbie came from neglectful situations, but unlike Chloe, Barbie had a litter of puppies found with her.  And after their rescues they were both very much timid and afraid, but through time became very loving and trusting.  However, they differed in that Chloe has found her forever home with my husband and I, but Barbie is still being fostered by Sarah--though I, for one, would love Sarah to keep her ;-)

I was extremely proud of Barbie as this was her first time to work in a school environment and she did exceptionally well.  All the kids got a chance to pet her and get their pictures taken before we departed, and Barbie seemed quite at home with all the youngsters.  Of course Chloe was her usual "chilled" pupster having become quite the Browning campus mascot!