Critters Care Story Time--"Henry the Dog with No Tail" 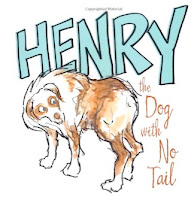 On Tuesday, April 2, I had the great opportunity to work with 2 teams for a story time presentation at Browning Elementary regarding the tale "Henry, the Dog with No Tail".  Jeff with his Australian Shepherd, Henry, who have participated in presentations and reading events with me before, and then a new team consisting of my father, Russ, and his dog, Cleo--a Newfoundland mix.  My 2 canine ambassadors--Serenity and Chloe--accompanied me while my mom assisted in picture taking.  We worked with Ms. Crow's 3rd grade students that were very excited to have so many loving pups in their classroom!  I started the presentation with having the kids guess the various dog breeds that

they were meeting and was not too surprised to hear "Pit Bull", "German Shepherd", "Labrador", and "Golden Retriever" as these are the dogs they are most familiar with.  I then read them this delightful tale that takes the listeners through the journey of Henry, who feels different from his other canine friends because he lacks a tail, so goes in search to find one for himself.  Along the way he begins to discover how a tail doesn't necessarily work for him, and in the end accepts his unique qualities, as well as do his other friends with paws.

After story time, I introduced the kids to the various breeds that these Canine Ambassadors represented--Australian Shepherd (Henry), Newfoundland (Cleo), Dachshund & Papillion mix (Serenity).  Since I have no clue as to Chloe's mix, I left her as a guess by the students.  The kids learned about the different aspects of each breed, as well as each Canine
Ambassadors individual stories and unique personalities.  For example, the word "Papillion" comes from the French word that means "butterfly", which the ears resemble (and a prominent physical trait of Serenity).  And though Henry's breed is known for loving to work and herd, Henry's favorite activity is just lazing around--although he does sometimes "herd" some small pups at the local dog park!  And despite the fact Cleo is about half the size of a true Newfoundland, which can reach up to 120 pounds for a female, she still maintains many of the breeds features.  But is different in that she does not care to be in the water (Newfies are notorious water lovers that are known for hauling heavy fishing nets through cold water and saving people from drowning).  And Serenity performed her mix to par.  Dachshunds are known for being tenacious hunters that would follow their quarry, enter its burrow, pull it out and kill it.  In short (pun intended) they love to sniff around on the ground.  So when I placed Serenity on the classroom floor that was the first thing she did--sniff all around.  The Papillion breed, on the other hand, is not known for performing a particular task, but rather for being a popular breed among nobility and serve as wonderful lap dogs that also loves to be held.  Serenity exhibited this trait, after she was done sniffing around, by yipping at me to pick her up.  The kids definitely got a great kick out of her performance.

Lastly the students had an opportunity to ask questions about all the dogs that were present, and one of my favorite youngster comment was "If Chloe is not any kind of breed, is she a mystery dog?"  So I guess I can dub her as my "Mystery Mutt"!